Ariana Grande’s music videos are always about a dramatic fashion transformation. Her last video for Positions was a fashionable ode to women in politics, and in the past, she’s also turned into Mean Girls’s Regina George, or dressed like Lady Gaga, dripping in latex. This week, however, the singer is back with a brand new music video for her song 34+35, released today—and her new style metamorphosis sees her turn into various cyborgs. But she’s not any ol’ robot. She’s a chic robot.

The new video sees Grande play the part of a scientist in a high-tech lab (complete with a white lab coat and sky-high white platforms to match, of course). She’s faced with an array of Grande cyborgs, wearing a different look. One is in a vintage nude Oscar de la Renta bodysuit with below-the-knee Fendi boots to match; another is a classic silver robot, only Grande’s armor has a built-in metal bustier and skirt.

The pièce de résistance, however, is at the end of the video, when the singer transforms into an Austin Powers-inspired Fembot. You know the one—the deadly robot with an alluring marabou-trimmed slip dress, which seduces men into submission. Her Fembot fit was true to the original film, complete with lilac gloves and even platform heels to match—don’t forget the bouffant hair, either!

GucciFest Continues With Films From Rui and Gui Rosa

Andrew Bolton and Nicolas Ghesquière Track Fashion’s Shifting Relationship With the Past, Present, and Future

Jewelry artist Megan-Marie is known for exclusive and artfully crafted jewelry collections. She has launched her “Althea Collection” of luxury 14K gold chains.

Every chain in this collection was handcrafted by me…The part that I love most, though, is that these chains are made to be individualized and flatter your unique body and style. ”

Known for her luxury handcrafted gold jewelry collections, Megan-Marie is a New York-based gold jewelry artist with a strong focus on quality and artistry. Being greatly admired by her clients, her collections have sold out fast in the past. She is now back with the new luxury “Althea Collection” featuring custom luxury 14k solid gold chain designs. Taking inspiration from organic textures and shapes, the collection is meant to reinvent and modernize jewelry designs often depicted in Greek mythology. With more chain designs soon to arrive, each order is handcrafted by Megan-Marie so the jewelry can best compliment the measurements of every client.

“Every chain in this collection was handcrafted by me, which really separates them from the generic designs we see in stores and online,” says Megan-Marie. “The part that I love most, though, is that these chains are made to be individualized and flatter your unique body and style. Whether it’s a chunky bracelet, short necklace, or shiny anklet, I believe everyone can feel incredible wearing these unique, timeless chains. And I’ve got more coming!”

The “Althea Collection” features highly customizable chain designs that can be altered to each client’s demands. The collection features The Hera Chain, The Dria Chain, The Klio Chain, The Ares Chain, The Circe Chain, The Astraia Chain and The Helios Chain. “The Helios Chain was inspired by the mythological Greek god Helios, the god and personification of the sun,” Megan-Marie explains. “The chain’s organic texture is meant to resemble the glistening Mediterranean Sea on a sunny day, and, when assembled, forms a clean, modern line. My intention was for it to feel ethereal and luxurious yet casual and comfortable.”

See also  The Only Balm For My Election Panic? Rewatching Veep

Previous collections from the artist such as the ‘Evergreen Collection’ and the ‘Spearhead Collection’ have drawn unique aesthetic inspirations from different places and eras, while still maintaining the luxury, handcrafted quality that Megan-Marie is known for.

ABOUT MEGAN-MARIE: Megan-Marie is a gold jewelry artist and a Doctor in Physical Therapy by degree. She is a first-generation American woman originally from the quiet suburbs of Boston. While she loved playing sports, her love for jewelry started young and evolved into a passion when she was yearning for a creative outlet in her mid-twenties. 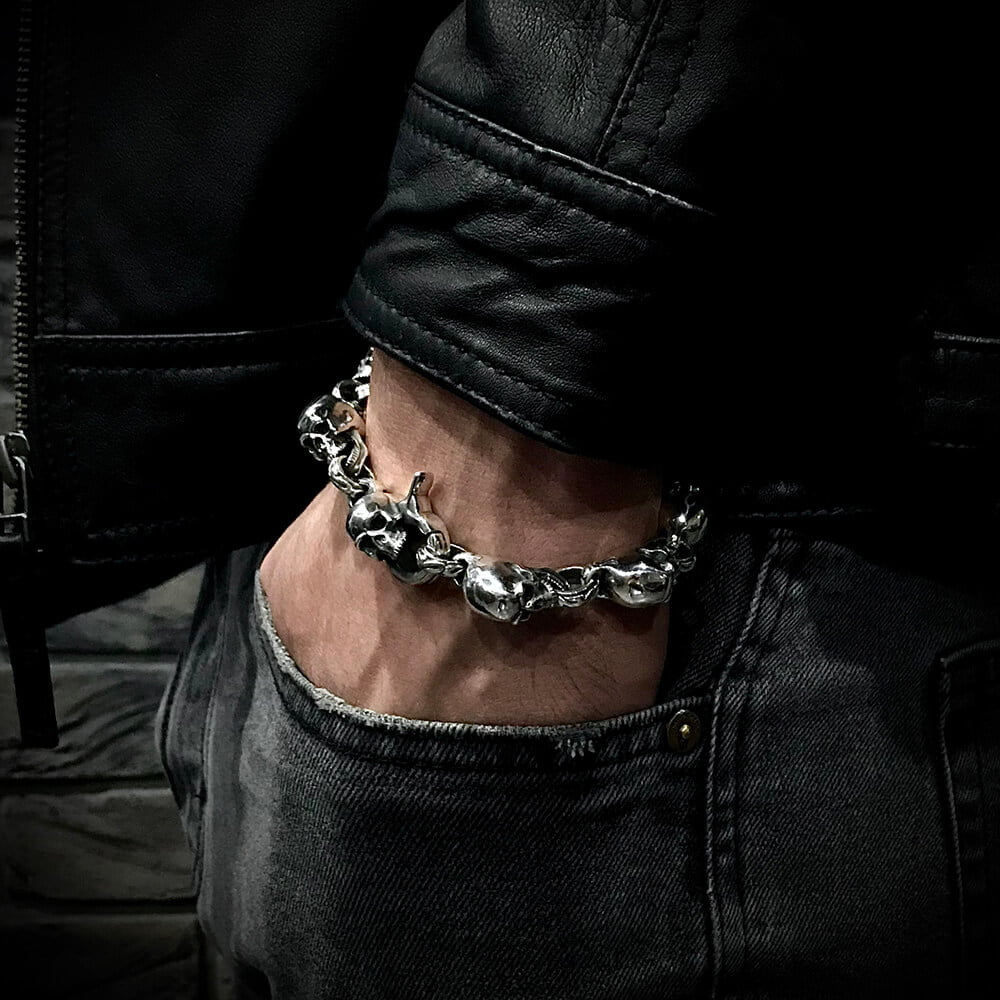 Skull bracelets are your way to stand out. They are a powerful fashion statement. They carry a range of profound meanings you can relate to. It’s high time to get your hands on the bracelets carrying skull images – they are all the go at the moment. Not sure which model to choose? We are here to help.

The Meaning of Skull Bracelets

Before we get to various types of skull bracelets, let’s learn why people admire skulls altogether. There are a few reasons for this phenomenon:

Now that you know why the skull is such an important and multifaceted symbol, let’s take a closer look at the options you have in terms of skull bracelets.

Chain bracelets are perhaps the most obvious choice when it comes to biker wrist ornaments. They are pretty versatile and can go well with casual, formal, sporty, and leather-clad looks. Skulls can be introduced into chain bracelets in a multitude of ways. The most obvious is a skull clasp with an otherwise plain bracelet. If this option seems too uninspired, you can go with skull charms or a skull-embellished ID plate. Still not enough? Then go big with skulls sitting on every link. Pretty impressive, ha? The only downside of such bracelets is that they lose their versatility since right-into-your-face designs are likely to clash with elegant attires.

Less versatile but nonetheless badass, dangles and cuff bracelets are the choice of bold fashionistas. They tightly hug the wrist – or the arm if you’d like to wear them this way – to showcase their bodacious designs. Normally, dangles carry either a single but pretty large skull as a focal point, or a series of smaller skulls stretching across the entire piece. The best part is that dangles allow experimenting with embellishment since they lend themselves well to bejeweling, tooling, plating, enameling, oxidation, embossing, engraving, and other means of decoration.

If you prefer natural, easy-to-wear, and up-to-date jewelry, leather bracelets are worthy of consideration. Today, braided pieces with skull beads or charms are all the rage. They are an ideal solution for relaxed and casual outfits. These models tend to be pretty slim but luckily, you can combine a few pieces for a more impressive look.

On the other hand, if you want to emphasize your belonging to subcultures, it’s best to go with wide and thick models. Skulls in these designs may appear on the clasp, studs, metal and stone inlays, branded elements, and in many more unexpected ways.

Hemp bracelets are a nod to the hippies and everyone who admires the trend for sustainability and eco-friendliness. They are super easy to sport and combine with other bracelets no matter what they are made of. Skulls tend to sit on the clasp or charms in hemp models meaning they are rather discreet. However, if you wear skulls because they have a personal meaning rather than being a fashion statement, this might be your best bet.