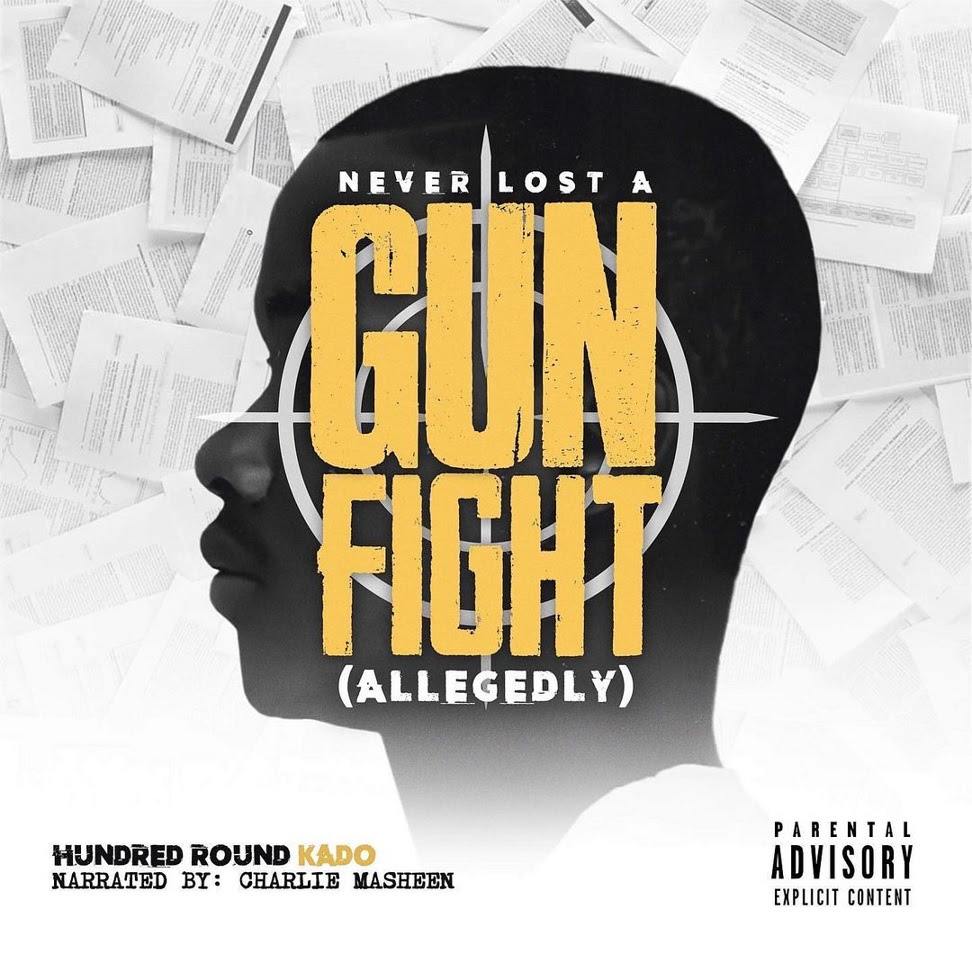 Boston-based lyricist Hundred Round Kado, whose name means “gift” in his native language, Haitian Creole. He embodies a revolutionary and emotionally raw spirit reminiscent of the Golden Age of hip-hop; aggressiveness mixed with deep introspection. This versatility is a testament to his superpower – articulating his experiences into words without creative compromise. However, the emerging underground MC, the byproduct of systemic racism, violence, and poverty, was heavily influenced by trap music (Gucci, Jeezy, T.I., Boosie, ZRo, Playa Fly). At 32 years old, Kado has spent one-third of his reality behind bars, yet his desire for rap has never wavered; if anything, it has intensified. The proof can be seen in his latest creation, Never Lost A Gun Fight (Allegedly).

Artfully executed, Kado’s 11th release is a tightly-wrapped 14-song tracklist with various perspectives and masterfully narrated by Charlie Masheen, who shines seamlessly. The title single is a cathartic ghetto gospel that opens with Masheen’s thought-provoking spoken word laying the energetic groundwork for Kado to spit his soul-baring truths over a sparse soundscape. On records like “Gratitude,” “Dead Person,” and “9 And A Nina,” there’s a soulful rap&b vibe as the MC flawlessly flows atop melodic basslines, while cuts like “Boolin In The Kut” and “Bring Your Skale” find Kado showcasing his ability for cinematic storytelling.

Each track is thorough enough to stand on its own yet as a whole, Never Lost A Gun Fight (Allegedly) is a brick-laced bar-for-bar symphony of cohesive hood poetry. It took over a decade of growth, highs, and lows, lock-ups and freedom, death, and life for Kado to produce the autobiographical content found in the project. From subject matter ranging from legal woes and street politics to relationship struggles and spiritual breakthroughs, Kado’s young OG reputation was earned. “I don’t rap; I make my life rhyme,” says Kado about why he makes music. Over the last few months, Kado has managed to drop back-to-back music videos for tracks from Never Lost A Gunfight (Allegedly) while confined to house arrest. The ability to hone in on the art and focus is seen in the outcome of the visuals; they don’t follow conventional scripts. In the video for the single “Dededede,” the dynamic rapper shows himself as somewhat of a bibliophile as the camera pans across his bedroom bookshelf showcasing the works of literary icons like Toni Morrison, Octavia Butler, and Zora Neale Hurston.

This collection of female authors might seem somewhat of an anomaly for a gang member currently out on bail while awaiting trial for a gun charge (allegedly), but Kado is a rare breed. On the strength of individual and professional respect, multi-Grammy-winning artist Malik Yusef introduced Kado to Roc Nation artist Vic Mensa while on the 4:44 Tour with Jay Z in 2017. The relationship proved to be mutually priceless.

“Kado is one of the most talented lyricists I know,” says Mensa. “The elite level of his wordplay is probably only trumped by the gravity of his story, which is breathtaking; born in federal prison, it’s a miracle he’s still alive and has been able to transmute his pain into passion. Kado held me down in some tough times when I had a lot of people out for me, but it wasn’t until 2021 when he was locked up facing a life, that our relationship became what it is today.

In those 8-9 months, I sent him nearly 40 books ranging from James Baldwin to Eckhart Tolle and saw this miraculous transformation take place in him as he began to harness his innate power to build, as opposed to destroying. In many of these verses, he spits for me when he was doing his time and always inspired me to go harder.” Yusef says, “Kado speaks the language of a certain journey that few will ever decode, but almost all will enjoy.”

Known as the Godfather of New England, Kado has a head for entrepreneurship and a heart for service. The strategic businessman has a portfolio of investments encompassing a barbershop, hair salon, clothing store, studio, and art gallery. Living up to the meaning of his name, Kado is truly a gift. A marginalized outsider who became an insider against all odds, including a 20-year history within the criminal justice system, the intelligent artist doesn’t know what his future holds. However, mentally, emotionally, spiritually, and creatively speaking, he’s free.

Multi-talented Hip-Hop Singer, RVKAH Is Currently Making Waves In The Music Industry With Her Incredible Voice